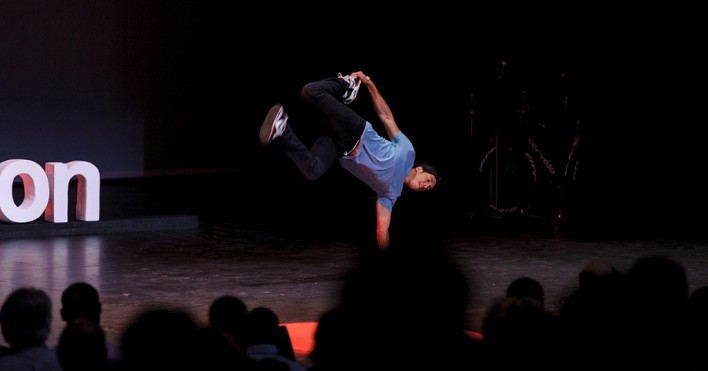 Breakin’ it down at TEDxBocaRaton

The city gathers to embrace “ideas worth sharing” and to their surprise are pleasantly energized by Hip-Hop’s acrobatic dance form, Breakin’.

It is not everyday that a TEDx event finds its way into Boca Raton.

So when I was walking around Florida Atlantic University, earlier this semester, and found a picture of myself on a TEDxBocaRaton poster—excited, I took that as a sign that I should get involved. In 2012, I had shot a TV spot for FAU’s national AD campaign ‘Making Waves’ produced by Boca Raton’s own Green Advertising.

Turns out that the production team for TEDxBocaRaton had seen the image and decided it would be a great fit to catch the attention of FAU students.

After seeing the poster, I quickly contacted the production team to get involved.

At the first meeting I met a range of smart and passionate community members who were all inspired to share ideas and engage the Boca Raton community, and behind this was Becky Woodbridge as the driving force of TEDxBocaRaton.

Somehow, I ended up dubbed the “Social Concierge” of TEDxBocaRaton and hosted brief segments throughout the event, along side motivational speaking guru Kandee G, which was quite an honor. After covering the twitter updates, I proceeded to do what I do best and energize the attendees with some smiling, flipping, and twisting—over a FRESH DJ FLeg Mix. TEDx was created in the spirit of TED’s mission, “ideas worth spreading.” The program is designed to give communities, organizations and individuals the opportunity to stimulate dialogue through TED-like experiences at the local level.

TEDx is a program of local, self-organized events that bring people together to share a TED-like experience. At a TEDx event, TEDTalks video and live speakers combine to spark deep discussion and connection in a small group. These local, self-organized events are branded TEDx, where x = independently organized TED event. The TED Conference provides general guidance for the TEDx program, but individual TEDx events are self-organized. (Subject to certain rules and regulations.)

This site uses Akismet to reduce spam. Learn how your comment data is processed.